Canopic Equipment Of The Kings O (Studies in Egyptology)


Musicians, playing instruments such as the castanets and flute, are depicted on objects from the Predynastic Period. A wide range of percussions, wind and string instruments were known to the ancient Egyptian. They include rattles, clappers, drums, tambourines and the sistrum ; pipes, flutes and trumpets; and harps particularly popular at feasts. The lyre and lute were introduced from the Levant.

Musical notation is not attested until the early Ptolemaic Period. Groups of musicians, either mixed gender or female only, are known from the Old Kingdom. Women singers and sistrum -players had an important role in temple cults, especially those of Hathor and Isis.


Tomb decoration from all periods indicates that, as today, groups of workers sang to generate a sense of solidarity and to maintain their enthusiasm. Detail of a freize from TT52 in which are depicted three musicians. Illustration of a harper playing in front of god Shu. A sistrum plural: sistra is a rattle used in religious ceremonies, especially temple rituals, and usually played by women.

Magic and Demonology in Ancient Egypt

Called a "seshsehet" in Egyptian, the name imitates the swishing sound the small metal disks made when the instrument was shaken. It was closely associated with Hathor in her role as "lady of music", and the handle was often decorated with a Hathor head.

Two kinds of sistrum are attested, naos -shaped and hoop-shaped; the latter became the more common. A coffin swiftly became an essential part of the burial equipment. Known euphemistically as the "lord of life", its primary function was to provide a home for the Ka and to protect the physical body from harm. In the 4th Dynasty , the development of longer coffins allowed the body to be buried fully extended rather than curled up on its side in a foetal position. At the end of the Old Kingdom , it became customary once more for the body to be laid on its side. The side of the coffin that faced east in the tomb was decorated with a pair of eyes so that the deceased could look out towards the rising sun with its promise of daily rebirth.

Coffins also began to be decorated on the outside with bands of funerary texts, while pictures of food and drink offerings were painted on the inside to provide a magical substitute for the real provisions placed in the tomb. In the First Intermediate Period , decorated coffins became a substitute for tomb decoration; in the Middle Kingdom , coffin texts made their first appearance, sometimes accompanied by detailed maps of the underworld. Middle Kingdom coffins show a number of distinct regional styles, echoing the cultural fragmentation of the preceding period.

In the 17th and early 18th Dynasties , the Theban area produced characteristic anthropoid rishi feathered coffins. These were replaced except for kings by other styles of anthropoid coffins which became the standard form throughout the country for the remainder of Egyptian history. The predominance of decorated tombs in the New Kingdom removed the need of object friezes, so coffins were generally undecorated on the inside. However, this situation was reversed again in the Third Intermediate Period when new types of coffin decoration focused on the Osiris myth and extracts from the Book of the Dead , to aid the resurrection of the deceased.

In the Ptolemaic and Roman periods, a cartonnage mask was often fixed directly onto the mummy wrappings as a substitute for a coffin. Coffins were generally made of wood; those of high-status individuals used fine quality, imported cedar. From the Middle Kingdom onward, wealthy individuals were often provided with a set of two or three nested coffins.

The most sumptuous coffins might be inlaid with glass or precious stones, while royal coffins were often made from gold or silver. Coffin of Nesykhonsu; c.

Vessels were used for storing the internal organs removed during mummification. These were named after the human-headed jars that were worshiped as personifications of Kanops the helmsman of Menelaus in Greek mythology by the inhabitants of ancient Canopus. The practice of evisceration is first attested in the burial of Hetepheres in the early 4th Dynasty. Her organs were stored in a travertine chest divided into four compartments. 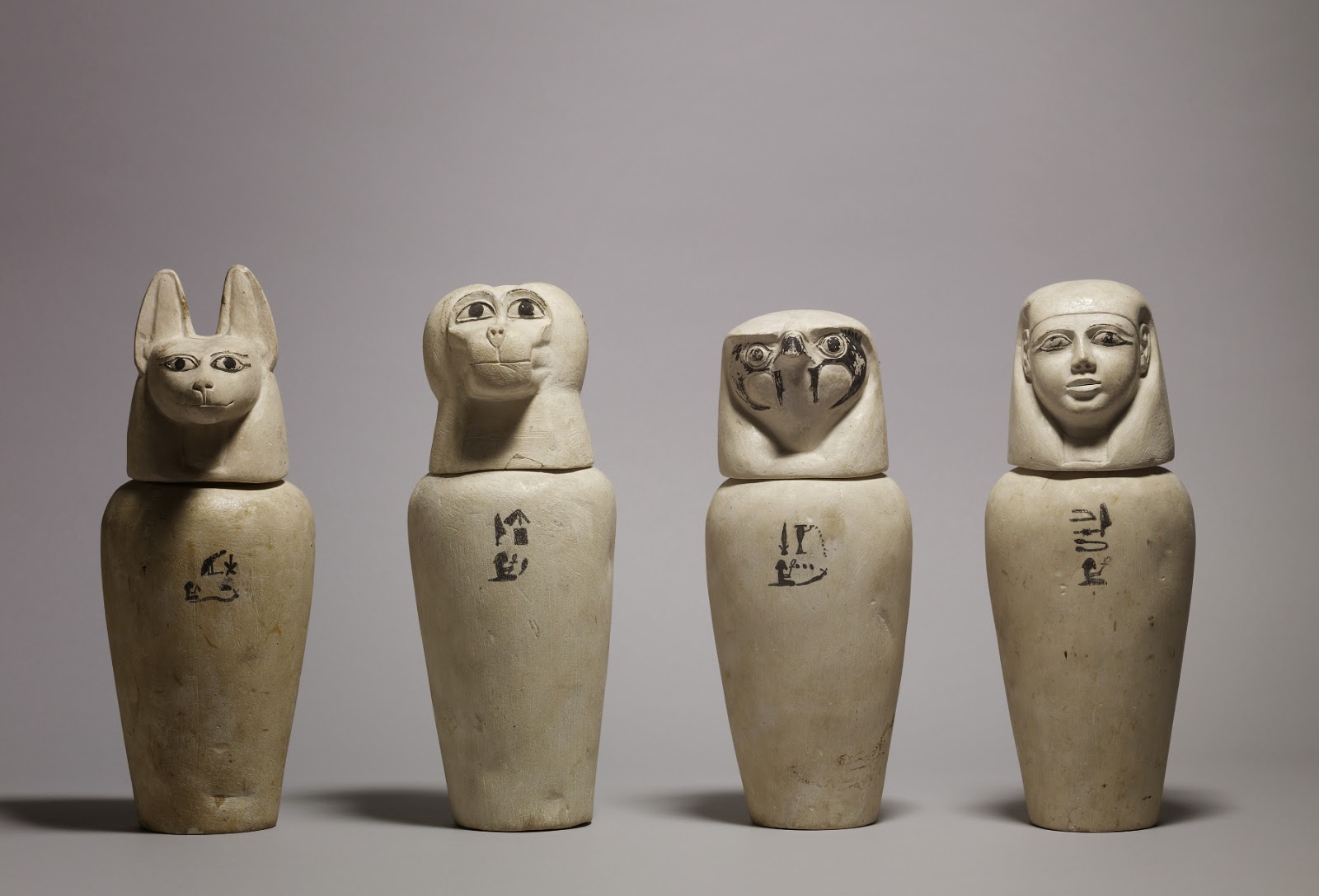 Later, each organ — the liver , lungs , stomach and intestines — was provided with a separate jar, of stone or pottery, and placed under the symbolic protection of one of the Four sons of Horus. During the First Intermediate Period , the stoppers of canopic jars began to be modeled in the form of human heads. From the late 18th Dynasty , they were more commonly modelled to resemble the heads of the protecting genii baboon , jackal , falcon and human.

This became the standard for canopic equipment in the 19th Dynasty. In the Third Intermediate Period , the mummified organs were generally returned to the body, but wealthy burials could still include a dummy set of jars. The last known royal set of canopic jars were made of Apries. The manufacture of canopic equipment continued into the Ptolemaic Period but ceased by Roman times.


Funerary masks have been used at all periods. Whether in a funerary or religious context, the purpose of a mask was the same: to transform the wearer from a mortal to a divine state. Mask of Sitdjehuti ; c. Mask of Tjuyu ; c. The Mask of Tutankhamun ; c. Portrait of a young woman in red; c. Ushabtis a.

Ushabtis evolved in the Middle Kingdom from the servant statues included among funerary gods. Ancient Egypt shared a long and complex history with the Nile Valley to the south, the region called Nubia modern Sudan. The result is a rich and complex visual culture. First, it was an indigenous African culture with roots stretching back thousands of years. Votive plaque of king Tanyidamani ; c.

Hill, Marsha Gifts for the gods: images from Egyptian temples. From Wikipedia, the free encyclopedia. Art produced by the Ancient Egyptian civilization. For art in modern Egypt, see Contemporary art in Egypt. Louvre Museum. This work of art both shows the influence of Mesopotamia on Egypt at an early date, during a period of Egypt—Mesopotamia relations , and the state of Mesopotamian royal iconography during the Uruk period.

The Canopic Equipment of the Kings of Egypt (Studies in Egyptology)